Globus CZ is a subsidiary of the German retail conglomerate Globus Hypermarket Holding and has been operating large hypermarkets in the Czech Republic since 1996. Their footprint has grown to 15 locations across the Czech Republic.

Challenge: Globus CZ wanted to greatly expand the use of self-scanning in its stores in a cost-effective way and to also offer a mobile self-scanning app

In 2017 Globus CZ started planning to expand self-scanning in its stores and wanted to offer more choice by adding a self-scanning mobile app as an option to customers. Globus CZ decided to develop a self-scanning app that customers could download to their own smartphones. Beyond the primary benefit of a lower TCO up to 3x compared to the dedicated scanners, mobile self-scanning would help Globus CZ deal with peak times like Easter and Christmas because buying dedicated scanners to address those short-term needs leaves the devices idle the rest of the year. Also, mobile self-scanning would offer Globus CZ the benefits of direct engagement with their shoppers and deeper understanding of their in-store shopping behaviors. After conducting a pilot, Globus CZ rolled the mobile app out to all 15 stores. 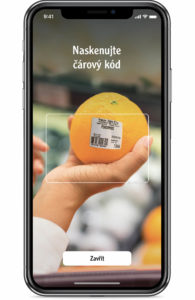 In the rollout, Globus CZ determined that the scanning library in the open source scanning engine in the app was not robust enough to support a successful chain-wide rollout.

To finalize a transaction, shoppers used the app to scan a QR code on the wall next to the self-checkout kiosks. This action sent a record of the entire scanned shopping basket to the self-scanning checkout server. However, the open source scanning engine occasionally generated double scans and sent a second empty order to the server that nullified transactions. This meant customers had to have their items re-scanned for payment at a traditional POS terminal.

Solution: After additional investigation, Globus CZ determined that Scandit was a far more reliable and scalable barcode scanning engine for their app than the open source software they previously used

The Scandit Barcode Scanner SDK delivered top scanning speed and accuracy even in difficult environmental conditions such as low lighting, in shadows and glare, at long distances and awkward angles. Scandit performed superbly on damaged and used labels especially, which were a significant problem for open source and compelled Globus CZ to change labels frequently. The double-scanning issue was eliminated, technical integration inside the “Můj Globus” app was easy, and Globus CZ welcomed the superior technical support when needed.

“Scandit is just way above the rest in terms of performance. After testing, Globus CZ rolled out the “Můj Globus” app using the Scandit Barcode Scanner SDK.”  Jiří Budinský, Head of Product Department at Globus CZ.

Result: Globus CZ’s successful promotion efforts of the app resulted in its widespread adoption, growing the number of active users to tens of thousands, nearly six-fold in just five months

After Globus CZ successfully launched its new Scandit-enabled “Můj Globus” shopping app for iOS and Android smartphones, they employed innovative tactics to accelerate adoption among their customers. For example, individual stores initiated advertising and promotion of the app and Globus CZ used “gamification” to increase competition among stores. Aggressive promotion of the “Můj Globus” app has resulted in more than 570% adoption growth in a matter of months. Globus CZ is also gaining visibility into how the app is being used. For example, the store with the best-performing app is located in a mall where shoppers buy fewer items but shop more frequently.