GfK combines data with scientific methods and provides the answer to key business questions involving consumers, markets, brands and media with innovative solutions – both now and in the future.

The robustness of the smartphone-based solution has also enabled GfK to collect more consistent data and respond better to new customer requirements.

How do consumers tick? Are there any changes in their consumer habits? Which new products are popular in the market? Which remain non-sellers? To find out, Nuremberg-based company GfK, a leading global supplier of market information for the consumer goods and commodities industry, has been investigating the purchasing behavior of the population for decades – initially only in Germany, but now also internationally. Until 2016, the company exclusively equipped all registered test persons with handheld scanners for reading barcodes in order to continuously record the purchasing behavior of their household.

Goal: GfK wanted to upgrade the quality and quantity of consumer purchasing data collected from testers across the globe

In order to shape the processes for scanning products for consumer market research in a more modern way, GfK decided to replace dedicated handheld scanners with a more convenient smartphone solution that not only offered scanning capabilities but also an app to record purchasing behavior.

The app is available in the app store for iOS and on Google Play for Android devices. Smartscan enables GfK to collect more robust and detailed data for customers because the Scandit-enabled app is loaded to panel subjects’ own smartphones removing the need to carry another device, and collects additional information that dedicated handheld scanners cannot.

Participants in the consumer panel simply load the app to their smartphone and making it easy to record product data. The conversion from dedicated handheld scanners to smartphones with the Scandit-enabled app enables GfK to optimize its data recording processes.

Participants in the trials who have their own smartphone therefore no longer require an additional device to enter their data. In addition, the app can be used to collect information that cannot be made available by hand scanners; for example, a photo of receipts can be taken directly, and updates can be provided faster and more easily.

Since the beginning of 2019, test persons can now use the second generation app, “MyScan”, which also uses the Scandit engine. MyScan additionally enables products to be captured with a mobile photo rather than a barcode, which further increases the quality of data collected. 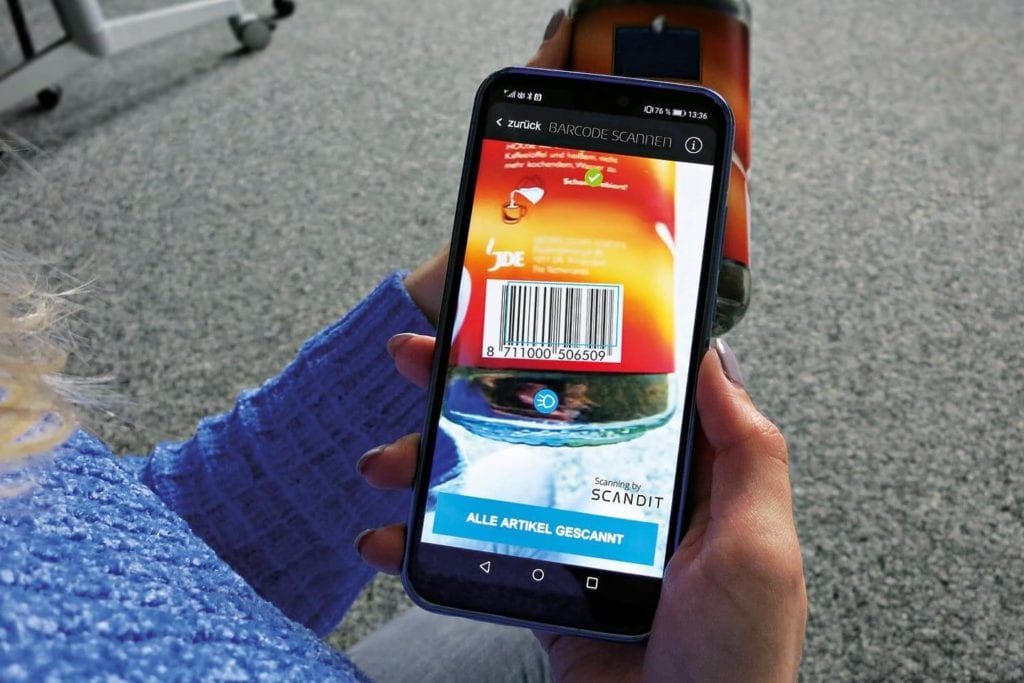 The Smartscan solution is based on the SDK barcode scanner from Swiss mobile computer vision specialist, Scandit. At the end of 2015, GfK analyzed the technologies available on the market for fast and reliable capture of barcodes using a smartphone. Upon the recommendation of checkitmobile (now Offerista) in Berlin, GfK’s partner for app development, the market researchers also analyzed the Scandit scan engine.

“The spectrum of symbologies was particularly interesting for us since Scandit not only covers the EAN and UPC standard codes for barcodes, but also the Code 128 and GS1 Databar variants”, explains Justus Gentner, Vice President Operations E2E Consumer Panel at GfK in Nuremberg. “And in addition, the reading accuracy and speed of Scandit also won us over.”

The participants of the consumer panel can use their smartphone cameras and the mobile app to quickly and precisely capture the barcodes of products, even in poor or uneven lighting conditions.

After downloading the GfK app from the app stores of Google or Apple, testers register, enter an access code and get started. After buying products, participants scan the items with their mobile device, enter products without a barcode, take photos of receipts and send the data to GfK. The users no longer need additional hardware and can capture the barcodes with their trusted devices really easily.

Result: The up-to-date solution has enabled GfK to attract younger people to the test panels, grow adoption of the Smartscan app from 6,000 to 100,000 users in two years and improve the quantity, quality and range of data collected

During this period, user figures have soared. Whilst about 6,000 test persons had installed the Smartscan app worldwide by the end of 2016, there are now more than 100,000 people who have downloaded the app.

“As we also wish to understand the purchasing behavior of the younger generation, a Smartphone app is simply the more modern approach. Young people want to use their own Smartphone to document their shopping behavior as quickly and easily as possible.”

The app is available internationally quickly and easily via the app stores. The app is currently available in German, English, Italian, Croatian, Dutch, Norwegian, Russian, Serbian and Hungarian. During the course of 2019, French, Flemish, Polish, Romanian, Slovakian and Czech will gradually follow.

The app also offers GfK new analysis options. If, for instance, consumers discover a new product, or if there are further questions about a product, the participants can use GfK MyScan to take a photo of the product and send it to GfK.

“In the previous solution, the test persons had to describe the product in their own words. These descriptions were frequently imprecise and inconsistent. The new app makes our data more consistent. We are able to respond better to new requirements with SmartScan and the MyScan app.”

The spectrum of symbologies was particularly interesting for us since Scandit not only covers the EAN and UPC standard codes for barcodes, but also the Code 128 and GS1 Databar variants. And in addition, the reading accuracy and speed of Scandit also won us over.