Gartner recently released a magic quadrant report for mobile application development platforms (MADP). For those not familiar, Gartner’s magic quadrants analyze players within an industry, and rank them in terms of their “ability to execute” and their “completeness of vision”, which categorizes each player as either a challenger, niche player, visionary or leader.  Figure 1 shows the mobile quadrant for MADP: 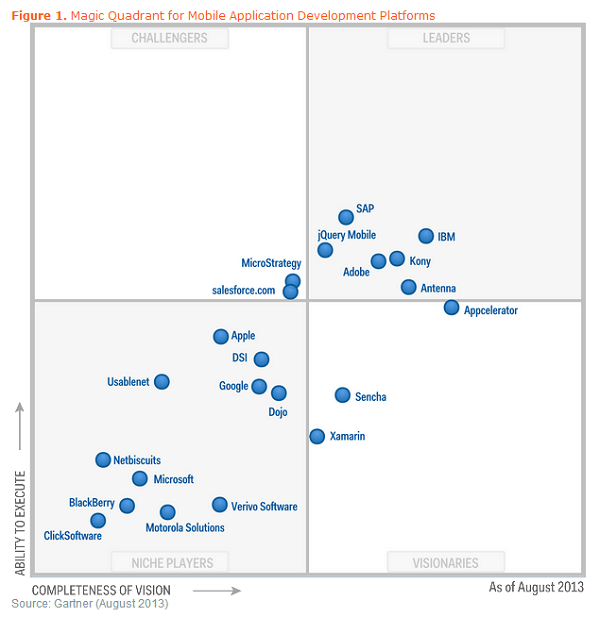 Both Apple (iOS) and Google (Android) are limited on the magic quadrant mostly because of their lack of cross-platform integration features and singular focus on iOS and Android devices. To dive deeper, iOS development requires skills in Objective-C, Xcode IDE and the iOS SDK, which aren’t yet typical skillsets found in enterprise IT environments. Regarding Android, the fragmentation of the OS and the limited portability from one version to another produces more friction for enterprise application development.

On the positive side, Apple’s toolkit provides such strong support for iOS devices that Gartner suggests this could be more important than cross platform support. When producing customer-facing apps, the sheer quality and performance of iOS apps creates a strong competitive advantage. For Android, the use of Java is advantageous since the language is commonly used in enterprise IT. Additionally, full access to the device capabilities combined with a robust hardware ecosystem make Android a flexible and powerful choice for developing enterprise apps.

New trends such as the Bring-Your-Own-Device (BYOD) movement are enticing companies to rethink their mobile strategies in the spirit of saving money and increasing productivity. This strategy is particularly advantageous in scenarios where many different employees infrequently scan an item in the workplace. Other alternative mobile strategies such as using rugged smartphones or rugged encased consumer smartphones (which are much cheaper than the traditional mobile computers running Windows CE or Windows mobile apps), are becoming more popular in enterprise settings.

One example to demonstrate how this is being played out is in the case of mobile point of sale (mPOS), where players like ZingCheckout and Square have undercut the costs of traditional POS system providers to the point where forward-thinking merchant communities are switching rapidly to iOS and Android tablet-based mPOS. As more innovative enterprise apps are developed that provide efficient and beneficial replacements for processes traditionally handled by mobile computers and barcode scanners across other industries, we’re likely to see Apple and Google’s positions on this magic quadrant move towards the “leader” category.

Appcelerator has earned the spot of the leading visionary on the Gartner magic square. For those who aren’t familiar, Appcelerator developed a platform called Titanium which allows mobile developers to create one code base (using Javascript) which then automatically ports to iOS, Android and Windows Phone. In this way Appcelerator is tackling the challenge of reducing the friction caused by platform fragmentation in the mobile sphere. As a byproduct, Appcelerator’s Titanium platform is driving the creation and popularity of enterprise apps running on Apple, Google and Windows Phone platforms. Their recent survey reflects the shifts in enterprise mobility we’ve discussed, demonstrating that more developers are engaging the creation of enterprise apps on the iOS and Android platforms.

At Scandit we realized early on that the enterprise market would shift towards utilizing more cost-effective and user friendly Android and iOS devices, which is why we’ve chosen to focus on these platforms. By providing an enterprise-grade barcode scanner that works phenomenally on Android and iOS, Scandit technology is enabling the creation of high quality enterprise apps that can be effective replacements for traditional barcode scanning hardware in the enterprise. Our technology is also available for the Appcelerator Titanium and Phonegap platforms, with Windows support coming soon!  Check out our scanning demo to get a sense of the user experience:

Stay tuned for an upcoming post which continues our discussion of the value of mobile device ruggedness in the enterprise!