Barcodes are everywhere. We use them everyday, from the average shopping trip to serious aspects of work – like monitoring medical supplies. They are under our noses to the point that we often miss them.

But where do they come from? Who invented the barcode? When were barcode scanners invented? And what was the first barcode?

If you have pondered these questions while watching barcodes get scanned in the supermarket checkout – then you are in the right place. At Scandit, we build mobile barcode scanning, text and object recognition solutions to help today’s enterprises work more efficiently.

So we can say with confidence that we know about barcodes and barcode scanning.

From retail self-checkout apps to patient verification tools for healthcare, we support a wide variety of industries with high-performance barcode scanning.

Barcodes are more than a useful tool for businesses and consumers. These compact codes of data comprise a whole history on their journey from idea to ubiquity. We decided to celebrate that history by compiling a list of our favorite, little-known facts about barcodes.

1. The First Barcode Symbology Was Patented in 1952 & Looks Like a Bullseye

In the late 1940s, Bernard Silver and Norman Joseph Woodland began researching solutions to automatically read product information during grocery checkout after a request from the food chain Food Fair.

Silver and Woodland are attributed with patenting the first ever barcode symbology (seen in the featured image above), which looks just like a bullseye!

Indeed, barcodes and grocery stores share a close connection—which has extended to many other types of retailers over time. Check out our retail page to see how modern retailers are using barcodes to reduce costs, improve efficiency and create game-changing shopping experiences for their customers.

2. The First Use of the Barcode Was to Label Railroad Cars

Most of us see barcodes on products, such as the food we buy, books, movies, and basically every modern consumer good. The reality is that the use of barcodes on consumer goods came far after its original intended use: the labeling of railroad cars. That’s right, barcodes first came into use to mark railroad cars, although they weren’t universally accepted until grocery checkout systems were developed.

Today, barcodes are used to streamline tasks, identify items and create new efficiencies across a huge span of businesses. Explore our industries page for more context on the different use cases for barcodes—and how Scandit can help you drive positive business results with them.

3. The Very First Scanning of a UPC Code Was on a Pack of Wrigley’s Chewing Gum

In the summer of 1974, a UPC code was scanned for the first time at a grocery market in Ohio. At Marsh supermarket, a 10-pack of Wrigley’s Juicy Fruit gum slid down the conveyor belt to mark the first ever grocery item to be scanned.

In the here and now, barcodes are used for much more than identifying items in-store. As more and more of us have made the transition to buying groceries online, barcodes have been deployed to support a range of delivery workflows, too.

4. Automotive Industry and US Defense Gets a Barcode – the Code 39

Code39 barcodes are used to label goods across many industries and are often found in the automotive industry and the US Department of Defense. The barcode was developed by Intermec Corporation in 1975.

It enables the use of both digits and characters, and its name originates in the fact that it could only encode 39 characters-though in its most recent version, the character set has been increased to 43.

Up to 43 characters including numbers, letters and some symbols can be included in the barcode. Since letters can be handled, CODE 39 is indispensable in the industrial fields and used in industries such as automotive and electronics.

It is easy to spot due to its large size. It remains a popular choice as it eliminates the need to generate a check digit — and can be decoded by almost any barcode reader. However, it has also been criticized for the same reason, i.e. it can hold relatively little data for a large barcode.

In 1981, US barcode specialist Computer Identics designed the Code 128, which featured a higher data density than the Code 39 along with a check digit to make it more robust against false positives.

The Code 128 barcode  is used worldwide and is common in sectors like warehousing, transport & logistics, manufacturing and healthcare.

5. The Barcode Battler Was One of the Earliest Mobile Gaming Consoles

Back in the early days of handheld gaming consoles (we’re talking 1991), there were very few players in the marketplace: Gameboy, Gamegear and Epoch’s Barcode Battler. This “barcode gaming system” came with a variety of cards containing barcodes, each representing a player, enemy or powerup. 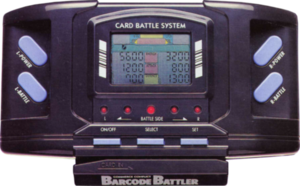 Players would then swipe the barcodes to initiate battle. The system never took off in North America or Europe, but was hugely popular in Japan where the culture embraced the idea of collecting and experimenting with barcodes.

The iconic Barcode Battler wasn’t the only innovation across the history of the barcode. In fact, this technology is still finding new applications and use cases across business operations today. Check out some of our videos and other resources to learn more about the latest breakthroughs in the world of barcodes.

QR codes were first created back in 1994. In 1994, a Denso Wave, a Toyota subsidiary, invented the QR code in order to help track vehicle parts. It was designed to allow for fast decoding speeds, hence the name Quick Response code.

It marked the beginning of the two dimensional barcode – so called because it is made up of  two-dimensional symbols and shapes.

QR Codes are now popular for marketing campaigns and directing people from physical to online content as they can be scanned on just about any smart device. This includes inexpensive smartphones.

7. Train and Airline Tickets Find Their Own Barcode – the Aztec

With probably the coolest name for a barcode symbology – the Aztec is a two-dimensional code.

The Aztec code was invented in 1995 by Andrew Longacre and Robert Hussey. The two worked at medical device manufacturer Welch Allyn. As well as being used in Healthcare, the Aztec is now popular with the transport sector and can be found on train tickets.

It was also chosen by the airline industry as the standard barcode for electronic boarding passes. So if a boarding pass has been sent to your phone, it is likely to feature an Aztec code. Many train companies from around Europe – including the UK, France, and Switzerland – use it in a similar way.

Unsurprisingly, it’s name derives from the central part of the code, which is said to bear a resemblance to an Aztec pyramid.

Today, a smartphone’s ability to scan a barcode with its video camera and decode it at lightning speed, is taken for granted. But video recording only started to appear on mobile phones in the early 2000s.

One of the first was the Nokia 6600, which was launched in 2003. At the time, it was touted as Nokia’s most advanced mobile phone. Features included a 6MB internal memory, WAP internet access, and Bluetooth. Top of the list was a VGA 640×480 camera, which could record up to 95kb of video between 9 and 27 seconds long.

Today’s smartphones record video at 4k resolution, allowing the Scandit Barcode Scanner SDK to scan any barcode in any condition. This makes it possible to replace dedicated handheld scanners with more cost-effective smartphones.

9. Medication Barcodes Were Made Mandatory in 2004

In February 2004, the U.S. Food and Drug Administration (FDA) ruled that barcodes must be applied on certain medications. Since then, barcodes on medication have included National Drug Codes, which are unique 11-character ID numbers for each type of drug. This small change made identifying and distributing medication to patients much easier.

Barcode technology has evolved to help healthcare providers tackle many other challenges across care environments, driving facility efficiency and superior treatment outcomes in the process.

Explore our healthcare page for more details on how barcode scanning is redefining and improving patient care.

Barcode Scanning for the Modern Enterprise

Beyond their everyday uses, barcodes have also inspired artwork, poetry, architecture and people from around the world to push their creativity.

Connect with us today for more information on barcode technology—and its many uses around the globe. You can also reach out for more specifics on how our mobile barcode scanning solution can support your unique business.

Select the right device for your scanning needs.